Receiving a Series A round is an important milestone for startup companies. Aside from the funding being much larger than a seed round, companies need to demonstrate they have a minimum viable product (MVP) to acquire an A round - and not just a great idea or team. It is not easy for seed funded companies to graduate to a Series A funding round.

In fact, less than 10% of companies that raise a seed round are successful in then raising a Series A investment. A Series A investment provides venture capitalists, in exchange for capital, the first series of preferred stock after the common stock issued during the seed round. Generally speaking, a Series A financing provides up to a couple of years of runway for a startup to develop its products, team and begin to execute on its go-to-market strategy.

Series A Funding: Average and Valuation

It is worth noting that the mean Series A is significantly higher than the median Series A, specifically among C rounds, followed by A rounds.

• Average Series A Startup Valuation in 2021: Series A startups currently had a median pre-money valuation of around $24 million.

While there are hundreds of venture capital firms in the U.S. alone (here is a listing of hundreds of VC firms), Some of the biggest Series A investors in software startups include Accel, 500 Startups, Bessemer Venture Partners, Andreessen Horowitz and Greycroft Partners.

A list of the most active Series A round, early stage investors also includes:

Pitchbook also cites these organizations as the most active investors in European Series A investments:

How to Get Series A Funding:

Approximately one-third of startups that raise Series A funding go through an accelerator[2] and the top 3 accelerators account for 10% of all Series A rounds[3]. The #1 factor evaluated for acceptance into leading accelerators is your team.[4]

When fundraising, your network is critical. While joining a top-tier accelerator gives you the best statistical chance for success in ultimately getting a Series A funding, these groups only accept about 2% of applicants[5]. Startups that successfully raised a Series A without going this route often did so by networking early and often with influential investors, whether they are Angel Investors or VCs from leading venture capital firms.

3. Extend and Nurture Your Network

Continue to nurture and leverage angel and micro-VC connections before even thinking of pitching them. Take As many new meetings as You can. Building and nurturing genuine relationships before starting the Series A tour can dramatically improve your odds.

Series A vs. Series B. While a Series A funding round is to really get the team and product developed, a Series B Funding round is all about taking the business to the next level, past the development stage. Tomasz Tunguz, a well known Venture Capitalist at Redpoint, says a Series B funding is the most challenging round for a startup company.

Typically before Series B funding rounds occur, the company has to have shown some strong achievements after its Series A round. Series B is therefore to pour the gas on for growth with a larger investment round.

Series B Funding: Average and Valuation

• Average Series B Startup Valuation in 2021: In 2021, Series B startups have a median pre-money valuation of around $40 million.

A list of some of the top Series B investors includes:

A Series C Funding Round generally occurs to to make the startup appealing for acquisition or to support a public offering. This is the first of what are called "later-stage" investments. This can continue into Series D funding, Series E funding, Series F funding, Series G funding, private equity funding rounds, etc. While there is a lot of capital ready, a lot of companies don't even make it to Series C. The reason for this is because Series C investors are looking for breakout companies that have already demonstrated significant traction. Thus, the deal size of Series C funding rounds has continued to increase.

Some of the most common investors in Series C funding include late-stage VCs, private equity firms, hedge funds and banks.

Seed funding is the first investment in a startup company in exchange for equity/partial ownership of the company. Seed funding can come from a variety of sources, such as friends and family, Angel Investors, Crowdfunding and startup accelerators. The reason for seed money is to help startup founders test an idea to see if they can demonstrate some product/market fit. To get seed funding, it is really about networking as well as selling the dream and team. Seed funding varies widely from just tens of thousands of dollars to up to around $10 million. The equity given up in exchange for the seed funding is generally in the range of 10% - 25%.

Some major sources of seed investors (beyond friends and family) include:

4. Seed Funds from large corporations such as Intel, Google and FedEx, offer seed funding to promising startups working on innovative technologies which might be good acquisition candidates later.

A list of of the most active seed investors includes:

With a Fundz account, you get real-time updates of companies that have announced new funding, an acquisition or are seeking funding via crowdfunding. Fundz also integrates executive contact and company data. Pro customers can also exports to CSV (sample) and can see real-time trends data on the top worldwide locations and industries currently receiving funding, with number of deals and total investment per industry and top location.  Both the interface and pricing are the best on the market. 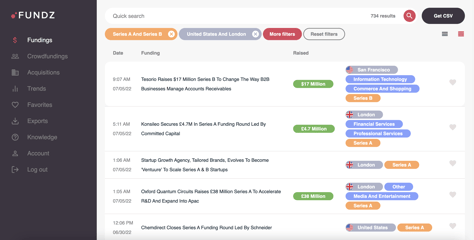 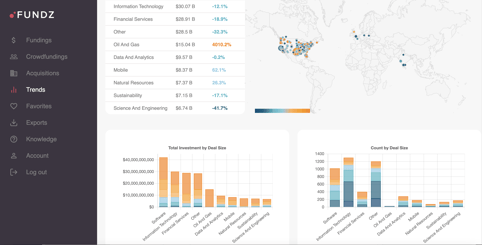 Funding Rounds and the Startup Financing Cycle: How it Works [Video]

What is a Series A Funding Term Sheet?

2."One-third of U.S. startups that raised a Series A in 2015 went through an accelerator." - Pitchbook

4."Overcoming The Odds: 10 Tips For Getting Into A Top Accelerator." - OnStartups.co

5."7 key things you need to know about an accelerator like Techstars." - VentureBeat

Great product! I got a few sizeable contracts through Fundz, so made a video to recommend your service for my followers.

Just wanted to let you know I love the product and leverage Fundz along with the chrome extension every day - love it!

Fundz has been a great tool that I recommend to others. 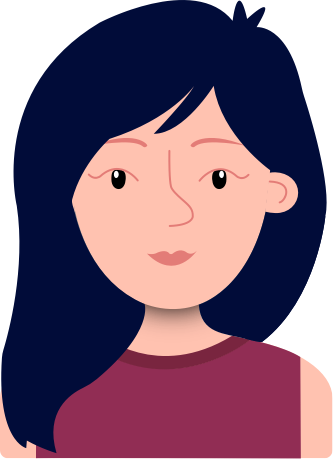 Fundz is terrific. It provides me with valuable information that I have used in my sales process and helped me close more deals!

Fundz is amazing because I can save and filter territory-appropriate alerts so that I'm not wasting my time looking at funding outside of my region. This thing is awesome!!