Solopreneur Startups on the Rise - The Numbers and Challenges

For anyone wanting to start their own business, the thought of doing it alone either encourages or scares them. A solopreneur is someone who goes it alone in their business, and the number of solopreneur startups in the US is on the rise. The kinds of companies these entrepreneurs develop are not just tech either, and they are not totally alone. 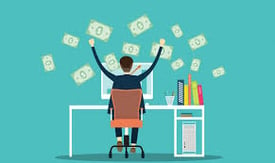 How many Solopreneur Startups are there?

There are millions of small businesses, and in the US alone, around 73% of the 30 million-plus are operated by sole proprietors.  Downturns in the economy over the last decade and a half have been one of the significant reasons why one-man-band companies have grown in number.

With 41.8 million people that identify as a one-person company, numbers continue to rise as people battle to find real jobs and thus have to get creative. Taking Solopreneurs broadly, the 41.8million and growing number of them contribute over $1.3 trillion to the United States economy.

Not quite full time

Many solopreneurs are not working full time; some make their own enterprise from a side hustle that slowly morphs into a full-time job. Making extra money and paying off debt is why some start their business; taking things slow, they eventually venture deeper.

Not quite full time allows a solopreneur to approach the challenges carefully. Many are not seeking to grow teams or find fame and fortune but merely make a living. This cautiousness is perhaps a valid reason why many owner-operated businesses are indeed successful and, in some cases, go on to make millions with an IPO.

The Challenges of Being Your Own Boss

As may be expected, there are many challenges in being the boss that goes beyond just business operations. In terms of operations, the Solopreneur is not entirely alone.  In the last few years, the gig economy has grown, and outsourcing has made running a one-person business easier. Outsourcing the task that a business owner cannot complete is a win-win situation; another reason why the number of solopreneurs is growing.

Today's self-operated business has a broader choice of supporting services and tech than someone had perhaps 20 years ago.

Mental challenges surround the world of the Solopreneur. Loneliness,  stress from being overworked, and the dread and fear of failure overtake everything. And yet, many profitable and successful solo operations overcome all of this.

Solopreneurs have created an ecosystem where one supports the other.  The combination of a growing gig economy, more services and support, and more apps (often created by a solopreneur) make running your own business straightforward.

One of the reasons a large number of solopreneurs begin their ventures is frustration. Either being unable to find a job or being stuck in a low-prospect career is where many people find themselves today. Back in 2009, Sara Blakely found herself there, and this triggered an idea that has now, a decade later, made her a billionaire.

Spanx is a true solopreneur success story and manufactures a broad range of women's apparel.  Starting as a woman with an idea that would change the world of fashion, hard work as a solopreneur paid off.

Today Spanx turns over $400 Million each year, employs 750 people, and Sara Blakely encourages others to start their own business.

Turning a Day Job into a Day Job

While frustration from not finding a job or being low paid is one reason for Solopreneurs to go it alone, others are different.

For some people in a full-time job, they feel restricted and can see a better way to do what their employer does. With the advent of a more robust and more accessible internet came opportunities, and innovative people grabbed this with both hands.

One such area that has seen individuals make six-figure sums is online training. Although the figures have dropped from the 2016 high of $20.86 Billion forecasters, predict online learning will be worth $15.86 Billion in 2021.  Those people who have the expertise to share are some of the most successful small businesses in the United States, with many former employees making more money from what was once a side hustle.

Are Solopreneurs the Way Forward?

2020 especially saw a dramatic change in work from home, but the current ecosystem of owner-operated businesses has been forming for over a decade. Some of the most well-known brands today, such as eBay, began as a solo endeavor and an idea giving modern entrepreneurs the confidence to start out.

Breaking into your own venture is easier, and the tools needed to start, run, and sustain a one-person business are affordable.

Lager companies are outsourcing to smaller businesses all the time, and solopreneurs with the right expertise and solutions are taking a piece of the pie. It is not that the landscape is evolving, but it is how business is being done that sustains the growth of the Solopreneur.

Owner-operated startups often have low overheads, and thus the service they offer is less expensive. Small businesses are a valuable part of the economy, helping find the balance between affordability and quality. Then throw in some innovation, and the once almost overlooked small business working from home becomes the Most Valued Player.

No crystal ball will tell you whether a startup will succeed or whether large companies will continue to need the services of the Solopreneur. There is, however, a wealth of information about small businesses in the United States that can help a person make educated decisions.

Fundz is such a source of highly qualified, up to date, and valuable data. This highly credible database of startups is a go-to solution for anyone who wants business information at their fingertips. If you are a solopreneur or planning to become one, Fundz could well be a tool that has uses beyond what is immediately apparent.