Satellite Internet Startups: Widening the Web for All

As time progresses, our reliance on the internet increases. Access to the web, or online resources, is considered a human right in many territories! However, many communities find they are still without easy access to the internet. Startups and innovators have had to think outside of the box - is satellite internet the answer? 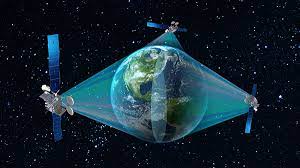 What Exactly is Satellite Internet, and How Does It Work?

As the name suggests, satellite internet revolves around satellites placed in orbit. There is usually a receiver, or dish, on solid ground, connecting with satellites thousands of miles into outer space. Satellites operating in this manner can be geostationary, which means they remain in the same position while moving with the Earth’s rotation.

The point of this type of system is so that the internet can effectively relay over wider distances. With some rural communities unable to access cable or fiber internet connectivity, it opens up a broader scope. All that is needed on Earth is a handful of dish setups for the relay to operate.

As such, satellite internet is quickly becoming a hot commodity. Multiple companies in the US and beyond work to provide satellite connections that are low in weight and cost to produce. Therefore, more people around the world are increasingly able to take advantage.

Even in 2021, just over 40% of the planet’s population still doesn’t have access to the internet. That, ultimately, is what ventures working in the niche are trying to reduce.

What Are Startups Doing to Support Satellite Internet?

It may be easy to assume that one satellite internet venture is likely the same as the next. However, innovations do vary across the niche.

Analytical Space, for example, is a US company helping to make satellite web more accessible and less temperamental. As a result of the positioning of satellites in orbit, throughput and connectivity are common concerns. Their FastPixel system aims to enhance communication strength through radio frequency innovation.

Elon Musk and SpaceX are entering the sphere, too. While it is relatively early days at the time of writing, the company’s Starlink service is already available to thousands. It’s a program aimed at people living in rural areas in states like Montana, where web access is sparse. In fact, Starlink’s byline for its beta program has been that it is ‘better than nothing’!

Over in Canada, Kepler Communications develop nanosatellites for internet access. This means that they provide technology at a lower cost due to the smaller hardware size. They are also working to partner satellite internet with IoT (Internet of Things) standards. This means everyday hardware and household items will soon be connecting with objects in outer space!

It all builds up to a fascinating niche. The internet is, regrettably, still missing from many people’s lives.

Satellite internet startups are working to bring the web to the rural masses. Real-time data is available now via Fundz - satellite connectivity is unlikely to be a flash in the pan.